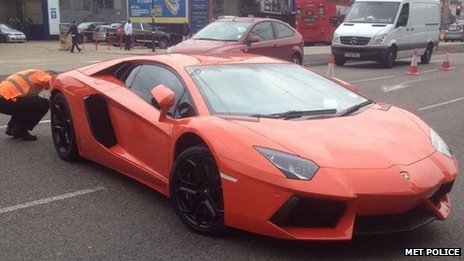 The Lamborghini Aventador does 0-62mph in 2.9 seconds
A sports car worth £400,000 has been seized by police in east London after the driver's policy was found not to cover him to get behind the wheel.
The Lamborghini Aventador was stopped in Newham because its front number plate was missing, causing police to carry out further checks.
It was one of 180 vehicles seized on Tuesday as part of Operation Cubo.
Thirty-seven people were arrested for offences include drink-driving, robbery and driving without insurance.

The police activity was part of a day of action to crack down on uninsured vehicles.
Since the launch of Operation Cubo in October last year, more than 11,500 vehicles have been seized during 22 one-day operations.

Ch Supt Sultan Taylor, of Safer Transport Command (STC), said: "The STC works to keep the travelling public safe and part of our duty includes carrying out operations such as Cubo which help to keep uninsured and dangerous drivers off London's roads."

[You must be registered and logged in to see this link.]